Bring Out Your Dead! The celebrity death thread....

Gallagher dead at 76 from organ failure. Watermelons can now rest easy and not worry about the sledgehammer. What a character!

He filed an interesting intellectual property suit against his brother after he had semi-licensed the act out to him, to be billed as "Gallagher, Too." Leo (original Gallagher) wanted to resume a more active touring schedule and didn't like that his brother (Ron) had not really been forthcoming with audiences about the fact that he wasn't Leo. In the end, Ron was no longer permitted to use the Sledge-o-Matic.

To fans of animation, there were few voices more iconic than Kevin Conroy. For years, this man was the voice of Batman.

The 90s were kind of a bleak time for comic book fans. The Christopher Reece Superman franchise was dead. The Batman films were losing their way. The XMen and Spider-Man films wouldn’t arrive until the next century.

The main bright spot was animation, and the Batman animated series led the way. I taped the episodes (VHS!!) and would watch them when I got back to my NYC apartment after work. I realized almost every episode had some guest voice that I recognized so I would freeze-frame the credits. Many people may not realize but the guy who did the voice of the Joker was in the Star Wars films. Name escapes me but you can look it up.

Anyway, Kevin Conroy enriched that show with his performance of Bruce Wayne and Batman. I’m sad to hear he’s gone at such a relatively young age. 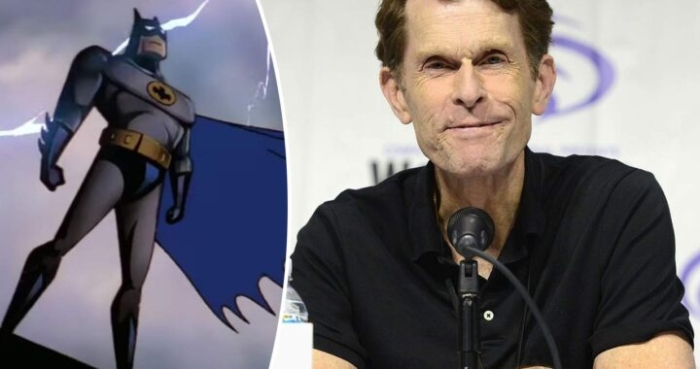 John Aniston. Ah, soaps in the 1970s and ’80s. Sister watching General Hospital every day after school; later, appointment TV in the dorm lounge for All My Children fans. After that, watching Days of Our Lives with my future wife before our afternoon/evening shifts at work, where even the crusty colleague had a soft spot for the goings-on of Kayla, Patch, Marlena and, suavely tormenting everyone, Victor. A well-done tribute:

Another Days of Our Lives alumnus, who led a remarkable life, even if it did include Hogan’s Heroes: Robert Clary. 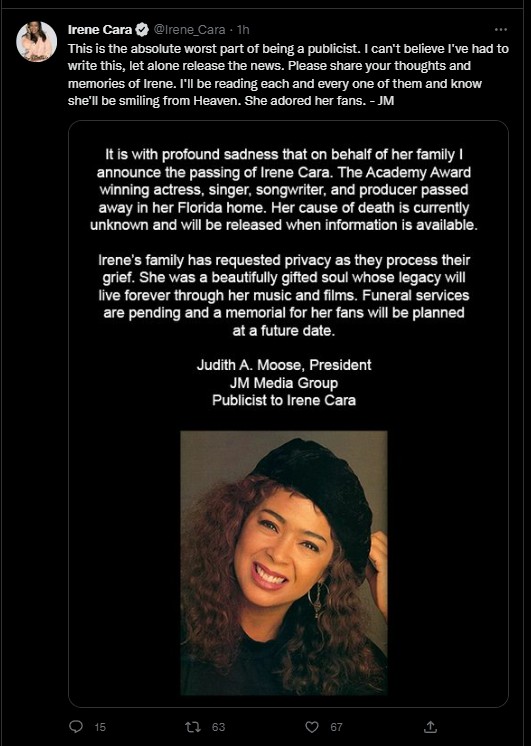 And now confirmed, although most news sources are quoting her publicist.

However, the entry in Wikipedia has also been updated, so that kind of confirms the confirmations, if you get my drift.

Saw this clip on the interwebs. Good stuff. 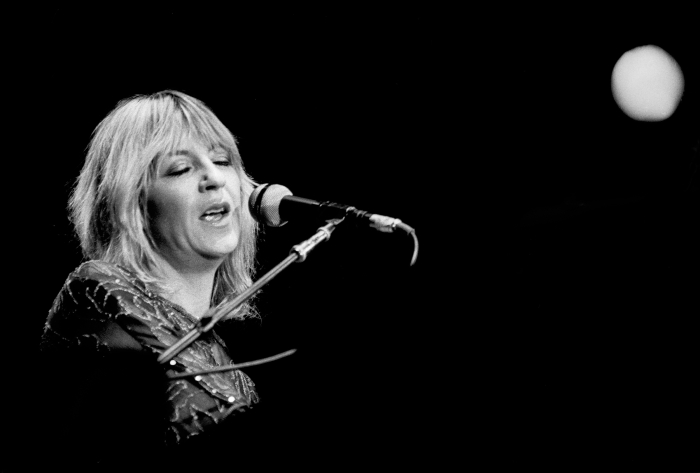 I’m just stunned! Firstly at her age, and secondly that she’s gone.
No!!!

I’m just stunned! Firstly at her age, and secondly that she’s gone.
No!!!

Seriously! Her songs for Fleetwood Mac were amazing. You Make Loving Fun is one of my karaoke standards, for some reason I can hit right in that range, and it's a little weird to see a dude singing it, but I absolutely love that song. Say You Love Me is another personal favorite, and to think Everywhere is now playing Everywhere thanks to a series of Chevy EV commercials over here.

Always liked this.  More of a taut, R&B sound than the typical FM fare:

A person in the neighborhood. 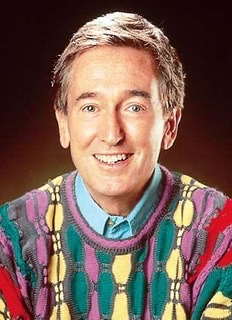 A person in the neighborhood.

Nooo!!  I went to high school with Bob McGrath's daughter, Cathlin (I think she was his youngest), and she took theater class the same year I did. I enjoyed the class, but it was probably a good thing to find out early on that I was not meant to be a theater kid. However, also in our class was Damon Lindelof, who did go on to create the TV series Lost.

For the class (maybe as our midterm?) we performed a few scenes in front of a very small audience. It was during our regular class period, so just a few parents came to watch. I was in an early scene or two, so after I was done I sat in the audience to watch the rest (I don't think I even invited my parents, so they weren't there). I ended up sitting down right next to Bob McGrath, and he was sooo friendly and genuine. It was a treat to chat with him.

And now I am sad. I also can't believe he already could be 90!

And a link to the NYT announcement: https://www.nytimes.com/2022/12/04/arts/television/bob-mcgrath-dead.html

Such precious memories, Sprout.
I’ve just caught up on the news and feel as I’ve lost a close neighbour, too, even though Sesame Stree didn’t begin here until I’d nearly stopped babysitting and started ‘proper’ jobs.

Kirstie Alley,71. That is a surprise.

Kristie Alley,71. That is a surprise.

"We are sad to inform you that our incredible, fierce and loving mother has passed away after a battle with cancer, only recently discovered," they said in a statement.

He wrote lilting and haunting melodies, presented full soundscapes, and basically treated music  as an unbodied actor of whichever project he was working on. Magic.
https://www.theguardian.com/music/2022/dec/13/angelo-badalamenti-david-lynchs-composer-on-twin-peaks-blue-velvet-and-more-dies-aged-85

Going back to some of his music, I’ve also learnt that apparently Julee Cruise died about 6 months ago. Gosh. 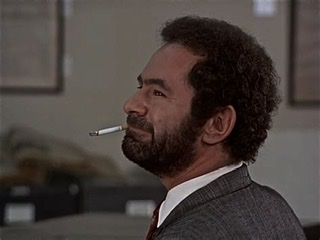 Former Rascals drummer, Jersey boy and, according to Steve van Zandt, “the greatest rock drummer of all time.”, Dino Danelli. 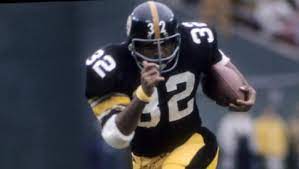 I was rooting for the Steelers in that game and couldn’t bear to watch the death blow, so I went into another room, crouched in a corner and covered my ears so I couldn’t hear the TV. Soon enough, my dad called out: “David, you might want to come back in here and see this replay.”

Franco Harris was one of only three or four posters I hung in my bedroom. He was an icon.

I was rooting for the Steelers in that game and couldn’t bear to watch the death blow, so I went into another room, crouched in a corner and covered my ears so I couldn’t hear the TV. Soon enough, my dad called out: “David, you might want to come back in here and see this replay.”

Franco Harris was one of only three or four posters I hung in my bedroom. He was an icon.

I'm from western Pa. and moved from Pittsburgh in 1971, just before Franco's and the Steeler's decade. Franco was one of my heroes.

eta - My heart is still with the Steelers and Pirates.

Our son has a Sports Illustrated cover signed by Willie Stargell and Terry Bradshaw.

with the 50th anniversary coming up, I was listening to hosts on ESPN radio discussing the Immaculate Reception. Funny thing was, with all of them too young to have seen the play in real time, they got the discussion of the controversy wrong. I still vividly remember watching that game, all the way until the end and I recall the complaints on the Oakland side. In 1972 it was not a legal forward pass if it hit another receiver and went directly to another without hitting a defender (either simultaneously or after). But the ESPN guys were going on and on about whether Franco caught the ball before it hit the ground, or trapped it. The real argument (to this day on the Raiders' side) is whether or not the ball hit Jack Tatum, or only Frenchy Fuqua. I looked at a pretty good quality video today, and I have little doubt, as I did then, that it was a legal catch and the officials got it right in real time without the help of video replay. (And then a few years later the rule was changed to allow a legal reception if two receivers in a row touched the ball).

Man, Harris was a great player.

But the ESPN guys were going on and on about whether Franco caught the ball before it hit the ground, or trapped it.

But the ESPN guys were going on and on about whether Franco caught the ball before it hit the ground, or trapped it.

it's apparently now a thing online. When I googled the play looking for video "touches the ground" is a top search term. Probably because most people know the play not from the original telecast but from NFL Films where the most typical shot of Harris making the catch doesn't have the ball in the frame. But the discussion during the game telecast was about whether or not Tatum touched the ball (which is in the Peyton Manning video in the link below around 1:30.) 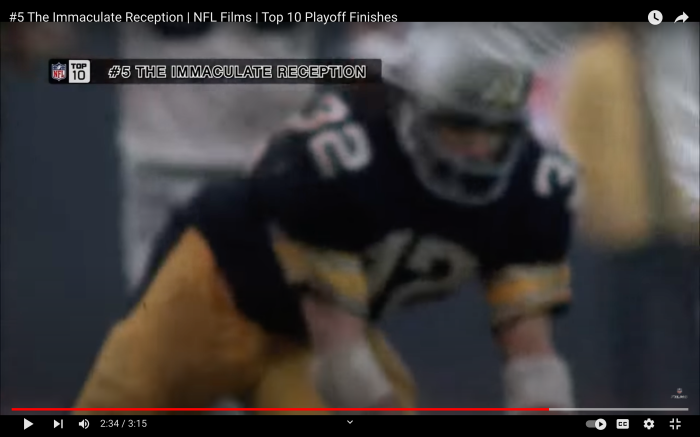 Nate Burelson interviewed Franco just a few days ago which is to be aired tomorrow on the 50th anniversary of the Immaculate Reception.

Nate Burelson interviewed Franco just a few days ago which is to be aired tomorrow on the 50th anniversary of the Immaculate Reception.

nice story about Franco and how he feels about the guy who ended up with the ball from his touchdown. (In the pandemonium after the play, they forgot to put the net up before the PAT, and the ball was kicked into the stands).  it's behind a paywall, but here's the relevant Harris quote (the guy who owns it is named Jim Baker):

Through it all, he maintains a firm grasp on his football and all the memories it holds.

“I lost my wife. I’ve lost two sons,” Baker said, tears welling in his eyes. “I still have that football.”

And to Harris, that’s the way it should be.

The running back has never felt the need to own the history he’s made. Take his cleats from that game, for example. They have since been donated to the Heinz History Center in Pittsburgh’s Strip District. When the Steelers replaced the turf at Three Rivers Stadium, Harris made sure they cut out the exact spot where he made his immaculate catch — and then rolled it up in a ball and threw it under his deck. Curators had to clean out a wasp nest before it went on display at the history center.

So for the person who has the football to hold it so dear? That’s good enough for Franco.“I know how special that ball was for Jimmy and his son,” Harris said. “Jimmy is the right person to have that ball.”

In order to add a comment – you must Join this community – Click here to do so.
Start a new discussion