Meet a Baseball Fan (Welcome to Anyone)

Some math thoughts on playing outfield.    The ball comes off the bat at say 90 to 100mph and as per physics and gravity force, it is actually traveling in a parabola.  But, there is a lot of air resistance, ball spin, humidity, and wind changing its course in mid-flight.  Due to the distance from the batter to the outfielder, the ball appears small.  Sunlight and shadows and even more difficult night flood field lights futher may make seeing the ball more difficult. The fielder must make an instant body movement decision on which way to run.  One wrong body  direction turn could be a disaster. The outfielder must adjust their running speed so as to get to the ball just as it is dropping into a playable location.  Eye and hand (glove) coordination are essential.

I was never a great baseball player. But I played an awful lot of games. There were times I found myself moving before a ball was hit, either in the field and on the bases. With the number of ABs MLB players see in the field, some of them are already reacting based on the pitch and how the batter is swinging. It's sometimes astounding how much information a human brain can process in an instant.

I thought this was a wonderful story. I had never heard of this game. I used to play APBA baseball all the time growing up.

Cool. I think I read about All-Star (and APBA) when my son and I were playing Strat-O-Matic.

The game that occupied a boyhood friend and me for two summers was produced by Sports Illustrated. We played with a 1970 set that his mother had bought at a yard sale. It was well designed and tons of fun, but SI made it for only two or three seasons.

It’s too bad the Phillies used up all their remaining magic in one Game 3.

But, man, the postseason stardust sure was fun while it lasted.

So bring on the pennant wannabes in 2023, and here’s hoping the Phils see the AL champs again next October. 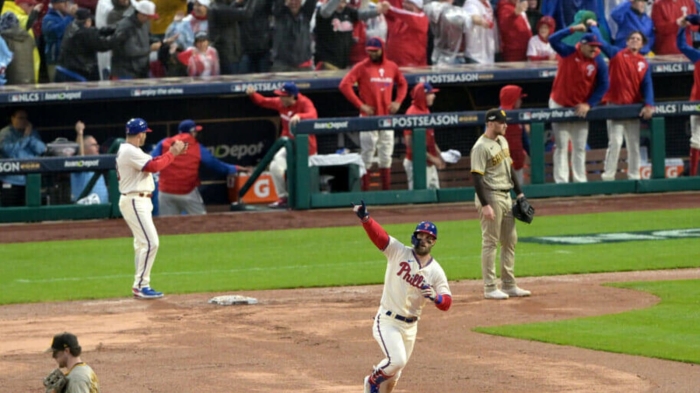 Just so the previous photo doesn’t unfairly define this thread in the MOL menu, here’s the blast that, as Crash Davis said, ought to have had a damn stewardess on it. 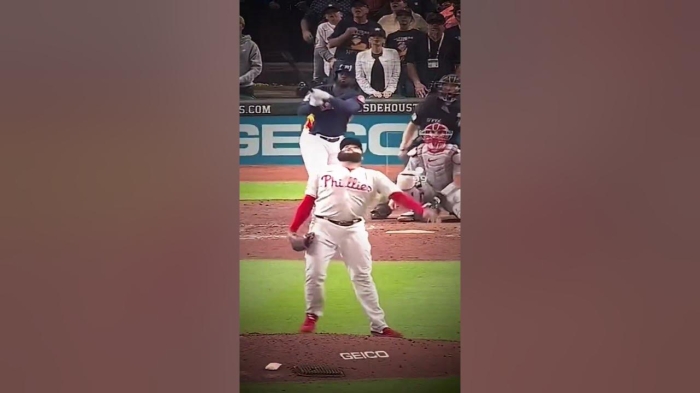 Where have you gone, Tommy Hutton?

On again off again commentator for Marlins TV games. My Dad's favorite.

Sorry about your team.

That was a good run.

Would have loved a Game 7.

You had a good run. Have to question Schwarber bunting with two outs and nobody on, but they wouldn't have gotten that far without him. That move is right near the top of my pet peeves.

You had a good run. Have to question Schwarber bunting with two outs and nobody on, but they wouldn't have gotten that far without him. That move is right near the top of my pet peeves.

That, rather than Wheeler’s removal, got me blurting, “What the heck?” On a 1-2 count with a chase pitch coming? To bring up Hoskins?

It made no sense. You're leaving it to the guys behind him to get a couple of hits to bring him in. And he was one of the few guys to hit the ball hard at least once that night. I do love those '83 uniforms they wore in Game 4 or 5.

that was the oddest end to an AB I've seen in a very long time.

I wish more people were this succinct. ^^^

In order to add a comment – you must Join this community – Click here to do so.
Start a new discussion