Bernie looked so angry at one point, he looked like he was in distress.

Liz Warren was jumping in before the first question was resolved.

Buttigieg had a sassy one liner but was clearly ruffled when he was attacked.

I think Klobuchar looks the best. And no major screw ups by Biden.

Mayor Pete winning so far IMO, Bernie second best. Bloomberg back on his heels, not doing well. Warren scoring points but too much on the attack - seems like she’s auditioning for Bernie VP. Amy a little shaky. Biden decent but still Biden.

Way too much fighting overall.

Klobuchar looked terrible on the Mexico thing. But then, I don't care for her much anyway.

wait, what did he say? I missed that.

Most exchanges sound petty and mean.

It’s all so cringeworthy. I’d take Mayor Pete in a heartbeat.

Liz decided to take the gloves off. She's been trying to be nice and perhaps looked at the results and remembered  the saying "Nice Guys Finish Last"

It’s all so cringeworthy. I’d take Mayor Pete in a heartbeat.

I wouldn't. I'm still not impressed by him.

I like Bloomberg's calm. I am so tired of histrionics.

Liz decided to take the gloves off. She's been trying to be nice and perhaps looked at the results and remembered  the saying "Nice Guys Finish Last"

She has been good tonight, should get a bump. But sanders is holding serve, so I dont see her meaningfully cutting into his lead.

I think Pete is quick on his feet and can turn a phrase but I don't see him as the leader of the free world.

wait, what did he say? I missed that.

Bloomberg, love him or hate him, sounds like a guy who knows what he is talking about.  His delivery is calm and confident, everyone else sound like they are desperate to make a point.

The environment is Mike’s wheelhouse.  He hit his stride on those questions.

Honestly I'm voting for someone to take on extraordinary problems. As a female, I am less concerned about what remarks a male candidate made about women, than his ability to solve issues on health care, climate change and foreign policy.

Bloomberg just called his opponents communists. What an *******.

Talk about giving Trump a gift.

Can all of the people on the stage stop trying to convince us of how poor they are. They are all doing OK, fine with me,

Cheap shot by Liz about Amy and Joe trying to please Mitch McConnell.

It was a circular firing squad. Bernie needs 3 houses? Not a great debate for Bloomberg, but I'm thinking people don't really care about all this stuff right now. Just tiresome now. Bloomberg looking more like the leader of the Free world.

I was worried Pete might get hit by a flying stapler at one point.

I was worried Pete might get hit by a flying stapler at one point. 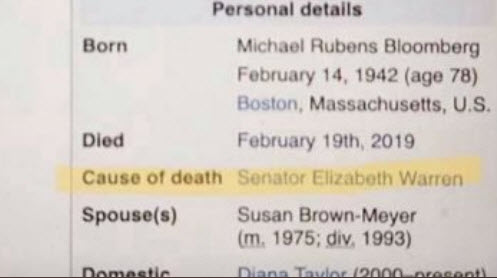 On one hand I thought Warren did well, but then I thought she was fighting the way a drowning person does to stay afloat.  Bloomberg had that kind of "I'm not prepared for this, but another hundred million should fix it" stare in his eyes; also "where are my attorneys?".  Bernie was Bernie in his Vermont cabin persona.  Klobluchar was shaking a bit, writing furious scrawl on her notepad: "Ignore the man on your right; you WILL be president".  Joe did fairly well, but people seem to set a low bar for him these days; I like how he shares credit with Obama.  Pete had some kind of preternatural calm about him; he likely won't win, but will replace the DNC chair if he loses and Trump wins.

For anyone who thought this was an undignified free for all should remember what GOP debates were like. At least no Democrats were competing to tell us how much they love torture, how many countries they would bomb, how many federal agencies they would close, or how big anyone's penis is.

I will vote for whichever Democrat wins the nomination but if it should be Bloomberg (unlikely) I will vote with the least enthusiasm and a distinct feeling of resignation.

Last night was the first time he had to step out from behind the advertising commercial curtain. He looked unprepared and ill suited to either take on Trump and perhaps even more disheartening, make any of the meaningful changes in this country that have created Trump as President in the first place. Certainly less corrupt than Trump (who isn't?) but other than that, same old shite, different tie. -I know I'm being a tad unfair with this last remark but I think it a bad sign (for Bloomberg) that it even occurred to me.

His ascension thus far seems not so much that he has the money to spend but that the people in this country STILL continue to weirdly equate making money to the qualities of being President.

PS: I liked Pete in the beginning of his campaign but he more and more strikes me as a calculating fraud.

ALSO: We have two highly qualified women on stage to do the job and I think it is about time that we voted for one to lead this country. -Even though Bernie is absolutely right about "Health care for all". -It is not a "Pie in the sky" theory but a happy healthy proven way of life in MANY countries.

As someone who has supported Bloomberg on here I have to admit he was awful last night. No two ways around it. Everyone knew, going in, the things he would be attacked on -- stop and frisk, NDAs, redlining etc. I don't think there were any surprises there. Presumably he had plenty of time to prepare and high-priced consultants to help him prepare, and his responses still pretty much sucked. I swear if I had 2 hours to prepare I would have done better. Plus a lot of the time he looked like a fish out of water, like he didn't want to be there. He did have a decent second hour, nothing great but not bad, but the damage was already  done.

Not sure where Bloomberg goes from here but unless somehow he mitigates the damage from last night and regains momentum he may be out of the race by the Wednesday after Super Tuesday. At which point Bernie will most likely have a hammerlock on the nomination.

Return to all Discussions
Return to Soapbox: All Politics


In order to add a comment – you must Join this community – Click here to do so.
Start a new discussion