This morning at 4:30 I awoke to  yowling.  Sarabeth was crying.  I found her under my vanity bench, trying to crawl toward me.  She was paralyzed, and in distress.  Gracie put herself around her cat, completely encircling her.  I threw on clothes and called Westfield vet.  I rushed over there, not really knowing if Sarabeth was still with me.  The vet was great---she was in  very rough shape, and I made the excruciating decision to let her go.  She was very close to the end, but she knew I was there and holding her. Just like that, she was gone.
If my heart was broken two weeks ago, it is completely shattered now.  Sarabeth was my soul-kitty----she repaired my broken heart when I lost my dad, and less than a week later,my Felicity.  She was there after the catastrophic Turnpike crash.  She was my constant and faithful companion, my original cuddle cat.   It was sudden---probably a stroke or blood clot---pretty common in cats in renal failure. It was merciful.  When she heard my voice, and felt my warmth (her body temperature was very low, and now I know that Gracie was probably trying to warm Sarabeth, with her own body heat) she looked up at me, closed her eyes, and never opened them again.  I am bereft, but I know she is with Simon. 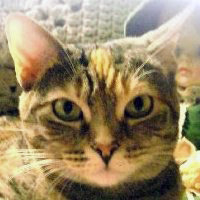 Oh my dear friend. To have these losses so close together. My thoughts are with you as they have been since Simon's departure. Rest in peace dear Sarabeth. 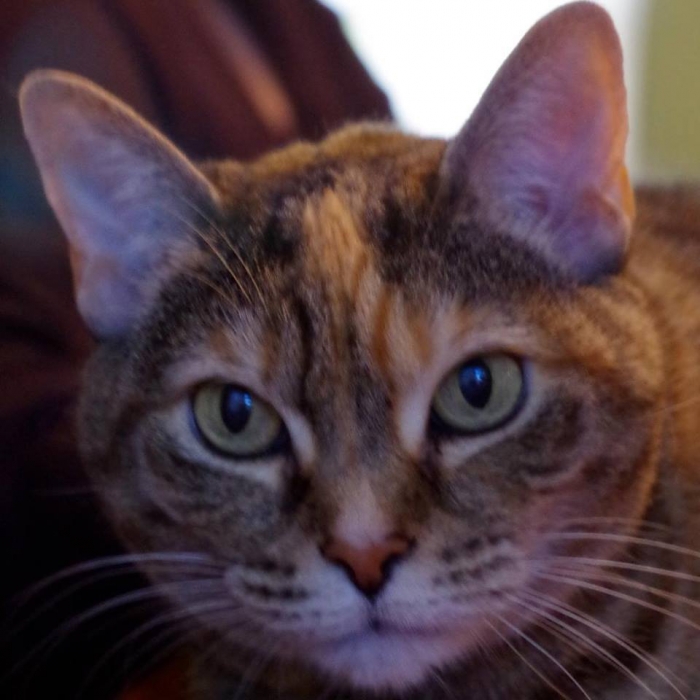 Oh Calli, I am so sorry to see this, two losses so close together! She looks like a real sweetie, I know you will miss her terribly. I am truly sad for you.

My heart hurts for you so! The loss of a beloved pet is so difficult to deal with, but the loss of two within weeks seems so unfair. Sending virtual hugs and wishes for comfort.

oh no - how heartbreaking.  I know what it is like to lose a kitty who was a constant for many years during all the ups and downs of life. Sarabeth was beautiful too.  So sad that you lost her and Simon so close together. Deepest condolences. Wishing you peace.

So, sorry to hear this.

So very sorry for your double loss.  Hugs to poor Gracie as well.

Oh, this is so sad, yet somehow comforting. I believe they are together, too, running happily and easily across the Rainbow Bridge. They will each have their place forever in your heart, but I know your heart is hurting so much right now. My deepest sympathy on the sudden loss of your girl.

In May 2014, Sarabeth was very ill with a kidney infection---all the odds were against her.  I was not ready to lose her---and she was not ready to go.  She was discharged from the hospital on IV fluids, and I had a terrible time trying to hold her and manipulate the bag and the needle.  Hauscat came over on the first night Sarbeth came home, before I could line up a vet tech to do this regularly.  She just sent me this picture which so beautifully captures Sarabeth's spirit.  Thank you all for these kind and loving expressions.  I am trying to process everything as well as cope with a dog whose heart is as broken as mine.  Thank you, all, and especially Hauscat, wonderful friend and magic with cats. 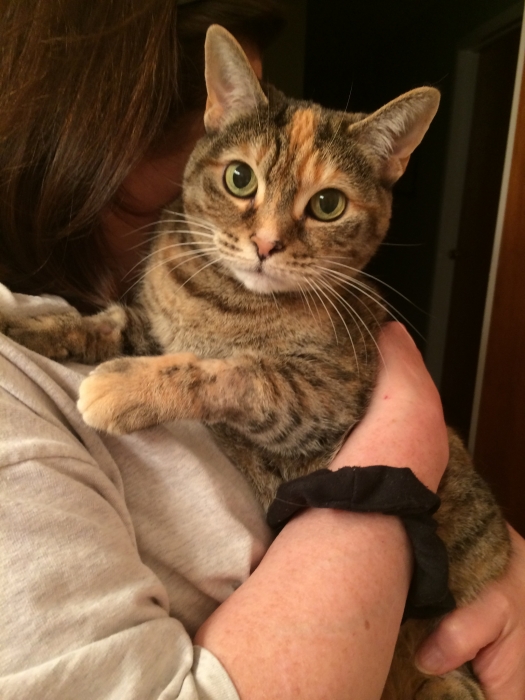 I'm so sorry, Calli. Sarabeth was such a sweet, loving angel cat. She was really happy with you.

Oh Calli, I m so sorry...such losses so close together. They had  a loving life with you!

How awful and sad.  My thoughts are with you, Calli.

Oh, this is just terrible, Callie - too much pain all bunched up together. With deep love comes deep loss that only time and more love can heal. Wishing you and Gracie peace and comfort in each other.

I'm so sorry, Calli. My heart really hurts for you.

Oh Calli and Grace, we don't have the words... D and I pray that soon happier memories will heal these raw wounds, and peace will be restored in your loving home and hearts.

this made me so sad. I am so sorry for your two losses.

So sorry to hear this.

I'm deeply sorry to hear the news. Sending you a big hug.

They aren't with us nearly long enough; it's the challenge of caring for them. My condolences to you on your loss.

How are you doing, calli? I've been thinking about you.

Oh wallflower, I am really devastated, given to uncontrollable crying, and waves of inconsolable sadness.  Simon was difficult enough, I knew he was ill, probably riddled with cancer, and the vet and I decided 6 months ago,that we would let nature take its course, and I was confident I would recognize the signs when his quality of life had diminished to such a degree that the end was near and further suffering would serve no one.  It was still tough.  I made a couple of appointments and cancelled, until ultimately, he did tell me he was tired, and had had enough. Simon was euthanized at home, in front of the fireplace, with soft Christmas music playing. He didn't struggle, and it was a quick release. While I do still have a bit of guilt that I let him down, somehow, hung on to him longer than I might have, for me, not for him. He was sick. He was probably 17 years old, and there was no chance for him to be the magnificent cat he once was.

But, Sarabeth, oh my darling, loving Sarabeth! In May of 2014 I found her almost lifeless body behind a big upholstered rocker in my bedroom---Simon perched on the back , Gracie guarding the front of the rocker.  They knew, they were keeping vigil. I scooped her up, and took her to Westfield Veterinary and Wellness Center.  She was critical, but I simply was not ready to lose her at age 12. They pulled out all the stops, I hand fed her, usually twice a day, while she was at the hospital (I made her home made chicken broth, and shredded chicken) and she made a remarkable recovery. We went with a course of IV fluids for a month, and she was so well,and had only marginal kidney disease as a result of the infection, that she was discharged with only yearly visits.  She seemed to be healthy again, down to under 5 pounds at the hospital, she was up to a pudgy 8½ pounds. She was sassy, playful, eating and drinking regularly and cuddling with me every night. She was especially affectionate the last 2 weeks, as though comforting me through my grief over Simon. I left a New Year's party early so that I could be home before the fireworks really started,to reassure both Gracie and Sarabeth. We watched the ball drop with Sarabeth on my lap, and Gracie at my feet.  So it came as a complete shock that she woke me up at 4:30am yesterday (was it only yesterday?) and she was in distress. I called the vet, threw on shoes and sped to the vet.  I knew she was in pain---and I had promised her 18 months ago, that I would never let her suffer. I kept that promise, and it was so difficult to not ask for another miracle.

And as hard as it is for me, I do know I did the right thing. Although she was devoted to me, she was also tightly bonded to Simon. I wonder if intuitively she felt her task to watch over him (because he was so grief-stricken when she was in the hospital, it was clear to me he could not have survived her loss) was complete, she knew I still had Gracie, and it was time for her to leave. (And if I didn't have Gracie, I don't know where I would be.)

This is the last photo I took of them together, raiding Gracie's water bowl.

Thank you wallflower, and all of you, some of you knew my critters in real life, and some only through my musings here. I want you all to know how deeply I appreciate all your kind words and condolences. It really touches me, and I realize, once again,the power of community that is MOL. 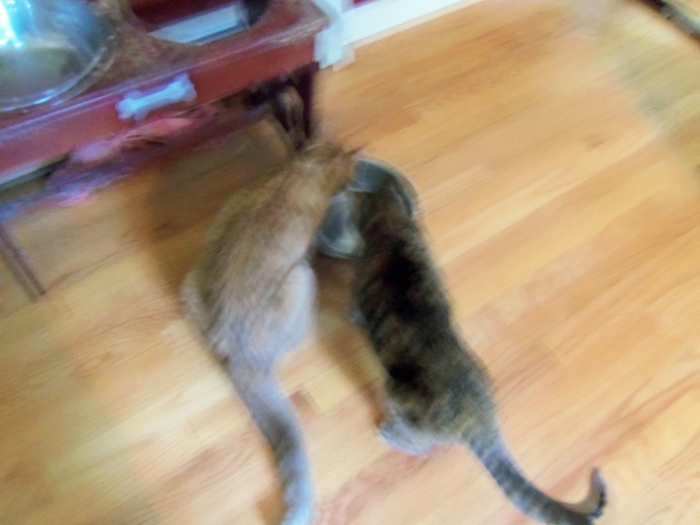 I'm so sorry for your loss. I know how devastating the loss of our beloved pets can be and how much you care for yours.  May Gracie and your memories bring you comfort.

Oh, NO! I am so, so sorry. To lose one loved pet is devastating enough; to lose two is beyond bearing. I hope Gracie helps bring you comfort.

Calli, oh no!  I'm so sad you are dealing with another loss.   She was a beautiful cat.  So very sorry.

Calli, I grieve your loss. Our pets are every bit as much of our family as people--sometimes more. Sometimes I think that I'll never have another pet because they don't live that long, but I find room in my heart somehow.

I had feelings of guilt for hanging on to one of my kitties because I could not bear to let her go,  then I felt guilty about that because of my need to keep her with me. Then again, I had feelings of guilt when I had one of my other darlings euthanized when she was ill, thinking I had given up too soon. One way or another, it all comes down to heartbreak and grief with losing our loved ones.  It will take time before some of the pain will lift.  And I feel bad for Gracie too.  Hang in there.

Return to all Discussions
Return to Blogs


In order to add a comment – you must Join this community – Click here to do so.
Start a new discussion